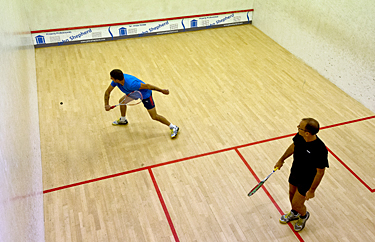 The club has two squash courts situated beyond the tennis courts with a balcony over both for the use of spectators and referees. The courts are open to members seven days per week between 8.00am and 10.00pm throughout the year. There are  Club nights for both Squash and Racketball, Internal Leagues and several teams playing in the County Leagues. 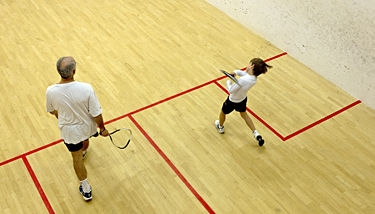 The Squash Section, which includes a very healthy and expanding Racketball Section is administered by a Committee comprising Chairman, Secretary, Team Captains, Internal League Organiser and Maintenance Advisor. The Committee meets roughly six times a year and its Chairman also serves on the Main Club Committee.  The Committee is responsible for the smooth running of the section, the leagues, tournaments and teams and for “The Squash and Racketball Vision” (how we see the section progressing over coming years).

Courts are available for booking by Squash members between 8.00am and 10.00pm – 7 days per week subject to Team games, club nights, tournaments and junior coaching. Courts can be booked in the Club House and remotely via the online booking system, for 40 minutes sessions.

The club currently has two mens squash teams and one ladies team playing in the winter leagues and one racketball team. League squash is also played throughout the summer. We are always looking for new members who would like to join a small friendly club and play in the teams where the general standard of squash and racketball is good.

Follow the results on News from WSRA at www.warwickshiresquash.org/

For further information on what’s on nationally, regionally and locally with squash you may be interested to log onto the : www.englandsquashandracketball.com/

The club runs internal leagues for squash and racketball which run for around 6 week sessions. Usually the top two are promoted and the bottom two relegated which means you get to play with new players each session. Open to all ladies, men and juniors.

The club runs its own Tournaments, Ladies, Mens and Junior Open Squash, an Open Racketball, as well as Squash and Racketball Handicap Tournaments.

Coaching is available for both Squash and racketball, details are found at  Junior Squash Programme (available shortly). Contact Jon Tate 07930 461390 or email:juniorsquashcoaching@kdrc.info