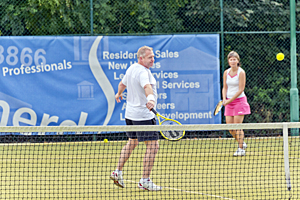 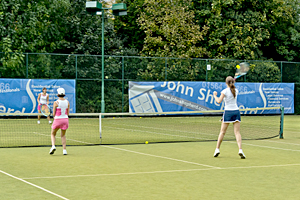 The club’s courts are bookable in 90 minute slots, outside of social and team tennis times.

The Club rule is that all tennis players wear predominantly white tennis kit (shirts and socks); however coloured tennis shorts or skirts are acceptable. This rule applies to both senior and junior tennis members. Non-marking tennis shoes must be worn (i.e. footwear specifically designed to enhance performance on a tennis court and guard against injury).

Regardless of age and ability there is something to suit all levels of play at Knowle and Dorridge.

Club sessions are held twice a week, all year round and are open to all tennis members.  If you are looking for a less competitive session then these sessions could be for you.

Held on a Tuesday evening from 6.00pm, just turn up and mix in with other members.  Additionally, club sessions are also held on Saturday afternoons from 2.00pm to 5.00pm.  Afternoon tea is provided by members from 3.30pm

When 4 players have arrived, spin racquets for partners and go on and play a short set (normally first to 6).  Once this game has finished the players come off and mix in with those waiting.

If another 4 players are ready prior to a four finishing their set, then they spin racquets and play a short set also, and so on.

When two or more players are waiting to mix in, playing members must play first to 5 games with sudden death deuces.

Mixed doubles play has priority  but if there is a surplus of ladies over men, or vice versa, then a mens or ladies four may be played.

Priority is given to those players who have not yet played.

Knowle and Dorridge Tennis section operates a fair to all policy and the mixing-in should be fair and transparent.

When required Tuesday evenings are played under floodlights, use of these lights at these sessions are currently provided free of charge.

Please note there are a few occasions when club sessions are cancelled due to club tournaments. Please refer to club notice boards, email communications and Facebook posts for notifications of these dates.

To enter the league, find a partner and contact Roque Santana-Vaz who runs the league on behalf of the club. Your names will then be added to the league. It is a great way to play different people and enjoy your social tennis at Knowle and Dorridge.

The league runs from 1st April until 31st March annually and the winners of the league are the pair that wins the most matches over the 12 months, which is not necessarily the pair that are at the top of the league. The overall winners will receive a trophy.

Pairs only have to play 3 matches over each period of the league. Periods are usually two months long i.e. 1 April to 31 May.

The winners of the match is the first pair to 10 games. You do not have to win by 2 clear games. The pair who win the most games during a playing period will move up to the league above and the pair with the fewest games will move into the league below.

If you are injured and have to withdraw from the league, please contact Roque Santana-Vaz. Players who do not play any matches over two consecutive periods will drop out of the league.

For those players looking for some competition, the club currently runs 10 teams in the summer Birmingham, Metropolitan and Coventry area leagues alongside mixed teams during the summer and winter. For those interested please download the Team Tennis Aims and Principles Guide and contact the current team captains and Head Coach for more information.

Please refer to the Club website for fixtures and times.

The men currently have 3 adult teams playing in the Birmingham Leagues, 1 in the Coventry league and a junior boys team in the Metropolitan League.

The ladies currently have 3 adult teams playing in 3 Birmingham Leagues and 1 in the Coventry League plus a junior team in the Metropolitan League.

We also have two mixed teams playing in the Metropolitan League.

Competitive tennis is not just restricted to the spring and summer months as we also play in 3 competitions during the autumn and winter months.

Warwickshire LTA also runs knock-out competition for singles and doubles so if you are interested  in playing within the county or region then  entry into these along with full details of all competitions available can be found at www.lta.org.uk (select “Warwickshire Club Players Championship” at the web site).

Played over 3 weeks during June. All players who enter must be readily available throughout the period.  It is a rule of entry that all players must be available at all times on Finals Day.

Doubles and Singles – Handicap and Open events are played on a knock-out basis.  Best of 3 sets, 2 short and 1 long for Open events and 3 long sets or Handicap events.  Entry lists and details of draws and handicaps will be posted up in the Clubhouse.

Please note that during the tournament there will be NO club social sessions on Tuesday evenings but the Saturday sessions will still run, apart from during Finals Day. On-line booking of courts will also be suspended during peak playing times for the duration of the tournament and court booking will take place via paper sheets that will be in the clubhouse.

These mixed doubles round robin competitions are held immediately after the Annual Tournament with finals played around the first Sunday in October.

Entry list and draw will be posted up in the Clubhouse.

Selected Juniors will be invited by the Head Coach to enter the Open events of the Annual Tournament and the Cooper Pontifex tournament.

This event is held on a Sunday afternoon.  Seniors and Juniors may enter as a same sex or mixed doubles pair, but there must be at least 20 years between partners.  (see Club Tournaments and Events)

Once a year the Club President hosts a round robin mixed doubles tournament and provides afternoon tea.  (see Club Tournaments and Events)

This event is open to all senior members and is  held at a time agreed with the President .

Members who are invited for tea  do not have to play in the President’s competition.

Entry sheets for those wishing to play tennis will be posted at the Club nearer the time.

Each year ladies are invited to play doubles tennis and enjoy lunch at the Club.  This is a round robin competition and there is a draw for partners.  Please watch the club notice board for more details.  (see Club Tournaments and Events)

The Astroturf courts are bookable all year around.  However times and availability vary.    There is a booking computer in the clubhouse, or you can book a court from any internet enabled device.  Go to